Any liquid or solid food produced for consumption which is discarded for any reason can be considered food waste. Food waste is regarded as a widespread problem throughout the food industry and occurs at every step along the supply chain. The total amount of food waste produced in the Unites States is estimated to be close to 103 million tons per year.

Industrial food processing and manufacturing are the leading sources of food waste in the United States. Approximately 39 percent of U.S. food waste is produced in this sector. If the commercial operations of retailers, wholesalers, restaurants, and food services are combined, they make up the second biggest source of U.S. food waste. However, taken individually, they would be smaller than the residential sector which produced about 24 percent of food waste in the U.S. Most wasted food ends up on landfills or is fed to animals, with 36 and 21 percent of wasted food being managed this way, respectively. When it comes to the management of wasted food in the U.S. only a small portion ends up as a donation.

U.S. citizens discard meal leftovers at home more often than any other type of food. Another commonly discarded type of food in the U.S. is fresh produce. Consumers try to address the issue with various ways of reducing food waste at home. Most frequently, they store food to maximize shelf life, keep their pantries organized, and make grocery lists. Despite the above mentioned fact that most food waste is produced by industrial and commercial operations, a large share of consumers see individuals and households as the group who are primarily responsible for addressing food waste.
This text provides general information. Statista assumes no liability for the information given being complete or correct. Due to varying update cycles, statistics can display more up-to-date data than referenced in the text.

Amount of food waste generated in the United States 2018, by sector

Share of the national food waste generated by the residential sector in the U.S.
24%

Distribution of food waste in the United States 2018, by segment

Distribution of wasted food management in the United States 2018, by type

Food loss between harvest and retail by global region in 2020

Number of food secure and insecure individuals in the U.S. 2021 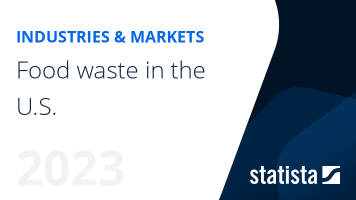 Go to report Food waste in the U.S.
Top Seller

The most important key figures provide you with a compact summary of the topic of "Food waste in the U.S." and take you straight to the corresponding statistics.