Published by Statista Research Department, Nov 17, 2021
The soup industry comprises products such as canned or packaged wet soup, dry soup and dry bouillon, and microwaveable soups. Soup is often seen as a comfort food, which keeps you warm during the winter months.
The market of condensed wet soup is highly concentrated and can be described as a duopoly consisting of the Campbell Soup Corporation and private label manufacturers. Eight out of ten condensed wet soup brands listed in the sales ranking belong to one of both vendors. The dry soup market is dominated by Unilever Bestfoods North America.

A recent survey revealed that over 50 percent of U.S. consumers have used dry soup or bouillon in 2020. In addition to category sales in the supermarket aisles, soup may also be enjoyed in the grocery store's deli department. Soup stations were named as an important area to concentrate on by U.S. retail executives in 2017. In order to increase the deli department traffic, some 35 percent of U.S. retailers considered active sampling/events as single most important strategy.

In the following 7 chapters, you will quickly find the 38 most important statistics relating to "Soup industry". 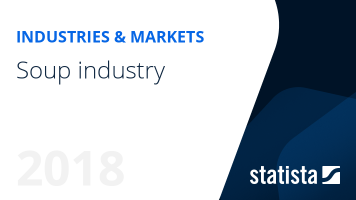 The most important key figures provide you with a compact summary of the topic of "Soup industry" and take you straight to the corresponding statistics.