The average attendance at Chicago White Sox games was at around 21.4 thousand in the 2019 season, with a total cumulative attendance of 1.63 million. For the same season, the average ticket price for a White Sox home game was 28.38 U.S. dollars, marking a slight increase on prices from the previous year. The team's official Twitter account has over 920 thousand followers.
This text provides general information. Statista assumes no liability for the information given being complete or correct. Due to varying update cycles, statistics can display more up-to-date data than referenced in the text. 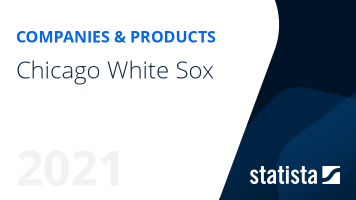 The most important key figures provide you with a compact summary of the topic of "Chicago White Sox" and take you straight to the corresponding statistics.