The digitalization of the Russian economy has seen significant progress over the past years, ranking the country in leading positions worldwide. The finance industry exhibited the most noticeable digital transformation, with the revenue of financial technologies (FinTech) exceeding 316 million U.S. dollars in 2021. Furthermore, a speedy development of e-commerce in the country contributed to a gradual increase of cashless trade in household expenditure. Due to the Russian invasion of Ukraine in 2022, key Western providers of financial services, including Mastercard, Visa, Apple Pay, Samsung Pay, and PayPal, suspended their operations in Russia. Therefore, the digital payments market was expected to decrease in 2022, while the segment of mobile point-of-sale (POS) payments was projected to shrink by 27 percent relative to the previous year.

What will happen to the market after the exodus of Western providers?

Following the market exit of several digital payment companies, Russians increasingly used domestic solutions, such as the Faster Payments System (FPS, or SBP) by the Central Bank of Russia, which allows to send money by entering a recipient's mobile phone number, as well as digital services of Russian banks, such as Sberbank and Tinkoff. The electronic wallet Qiwi, founded in Russia and headquartered in Cyprus, continued to operate in the country. Furthermore, Russia has a domestic bank card payment system, Mir, operated by the National Payment Card System (NPCS, or NSPK). The revenue of NPCS steadily increased in recent years and reached over 29 billion Russian rubles in 2021. When asked how their paying method changed after Google Pay stopped working on their devices, three out of ten Android users reported switching to Mir Pay in 2022. Besides online payments, Russians used mobile operator billing. In 2021, the average carrier billing transaction value in the country stood at nearly four U.S. dollars.

Payment cards were the most common way to pay for online purchases in Russia, ahead of e-wallets and bank transfers. Around one half of the country's digital payment users purchased their e-commerce orders with bank cards. The total value of payment card transactions increased continuously over the past decade. In 2021, it amounted to around 67.8 trillion Russian rubles, up nearly 18 percent compared to the previous year. Debit cards were generally more popular among the population than credit cards. One quarter of Russians possessed a credit card, a share lower than in many other European countries.
This text provides general information. Statista assumes no liability for the information given being complete or correct. Due to varying update cycles, statistics can display more up-to-date data than referenced in the text.
Published by Statista Research Department, Nov 24, 2022

Distribution of cash and cashless money in Russia 2019-2022 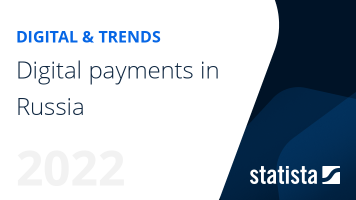 The most important key figures provide you with a compact summary of the topic of "Digital payments in Russia" and take you straight to the corresponding statistics.