The importance of food security can be broken down into four main components. First, the availability of food in sufficient quantities needs to be supplied through either domestic production or imports. Second, there needs to be adequate access to a nutritious diet and food for all individuals. Third, there needs to be appropriate utilization of food through a proper diet, clean water, sanitation, and healthcare for individuals. Lastly, there must be stability in access to food, where individuals are not threatened to scarcity or supply difficulties at any time.
In a global context, 9.7 percent of the world’s population experienced severe food insecurity in 2019, with the largest share of severely food insecure people located in Africa at 19 percent.

Situation in the Middle East and North Africa

As of 2019, the Middle East and North Africa region had one of the world's lowest food loss scores. This indicates that the governments of the region have not addressed enough policies to combat food loss and waste. At the same time, they scored as low as North America in terms of food end-user waste.

The outlook of every country in the Middle East and North Africa in terms of their food natural resources and resilience score is quite diverse. Turkey scores the highest in this index which indicates it can produce enough food domestically to fulfill the needs of its people. At the same time, the majority of Gulf Cooperation Council countries as well as Yemen were the lowest scorers of this index.

The Gulf Cooperation Council region has a high decadence rate of food imports, mainly of important staples such as cereals. Qatar had the highest score in food security performance in the entire GCC and MENA region in 2019. However, there was a major concern in 2017 that Qatar might struggle with adequately supplying its residents with food as its conflict with Saudi Arabia meant that its main food import sources were cut off. Which Saudi Arabia had lifted in 2021.
This text provides general information. Statista assumes no liability for the information given being complete or correct. Due to varying update cycles, statistics can display more up-to-date data than referenced in the text. 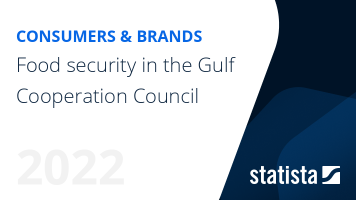 Go to report Food Security in the GCC
Top Seller

The most important key figures provide you with a compact summary of the topic of "Food security in GCC" and take you straight to the corresponding statistics.