Published by
Mariam Saleh,
May 9, 2022
In 2022, Africa counted just over 1.4 billion inhabitants and was the second most populous continent in the world after Asia. The annual growth rate of the population has constantly been above 2.45 percent from 2000 onwards. While the growth rate has been declining slightly in recent years, the population continues to increase. The continent would reach nearly 2.5 billion inhabitants by 2050. Rapid population growth, high fertility rates, low median age, increasing life expectancy, large households, and widespread poverty are the main features of Africa's demographics.

What are the most populous countries in Africa?

With over 200 million inhabitants, Nigeria was the most populous country in Africa in 2020. It was followed by Ethiopia (115 million), Egypt (102 million), and the Democratic Republic of the Congo (90 million). Nigeria’s population is forecast to exceed 400 million people by 2050, climbing the ranking of the most populous countries in the world. In general, several African nations are among the fastest-growing populations worldwide. The population of South Sudan registered a growth of 5.05 percent in 2021, followed by Burundi at 3.68 percent. High fertility is one of the reasons that lead to population growth. Africa has the highest fertility rate in the world, set at an average of around four children per woman.

What is the median age in Africa?

In 2020, Africa had a very low median age of around 20 years, meaning that half of the population was older and half was younger than that age. At the same time, the continent registered the lowest life expectancy at birth worldwide in 2021, with people living 64 years on average. Longevity in Africa is hindered by poor healthcare, which concerns the majority of the population. Neonatal conditions and respiratory infections are, in fact, the leading causes of death on the continent. Overall, the low life expectancy at birth and the high fertility rate explain why Africa's population is particularly young.

How poor is Africa’s population?

In 2022, around 460 million people in Africa were extremely poor, living on less than 1.90 U.S. dollars per day. Extreme poverty is particularly widespread in Nigeria and the Democratic Republic of the Congo, the African countries hosting the largest shares of the global poor population. Estimates made in December 2020 showed that the coronavirus (COVID-19) pandemic could have pushed additional millions of people into poverty between 2020 and 2021. Nevertheless, poverty levels in Africa are forecast to decline drastically. The share of extremely poor would reach 1.7 percent between 2056 and 2065, compared to around 35 percent from 2016 to 2025. Declining poverty, together with improved health conditions, would increase life expectancy and reduce mortality on the continent.

In the following 8 chapters, you will quickly find the 48 most important statistics relating to "Demographics of Africa ".

The most important key figures provide you with a compact summary of the topic of "Demographics of Africa " and take you straight to the corresponding statistics. 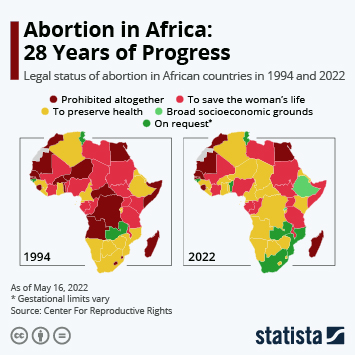 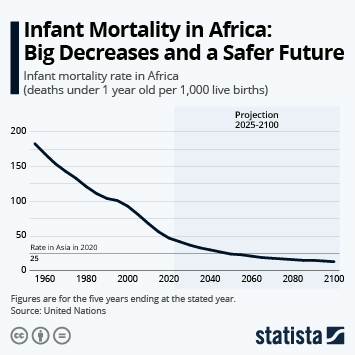 Mariam Saleh
Research Expert covering North Africa, specializing in the socio-economic environment of Algeria, Libya, Tunisia, and Morocco
Get in touch with us now