Published by
J. Mendoza,
Aug 2, 2021
The coronavirus (COVID-19) pandemic has had an impact on the psychological well-being of citizens all around the world, as almost every part of normal life was affected. In Spain, 48 percent of citizens stated that they thought the situation would have a negative long-term impact on their mental health. 22 percent of the Spanish population suffered from at least one mental health condition during 2020. Specifically, 14 percent reported that they had experienced anxiety, while 10 percent stated that had suffered from depression.

In Spain, around 3.2 percent of men and 7.2 percent of women were diagnosed with depression in 2020. In the case of anxiety, approximately 3.5 percent of men and 8.1 percent of women had been diagnosed. The real prevalence of these disorders, however, is expected to be higher, as many people who suffer from depression or anxiety have not been diagnosed by a doctor. The prevalence of mental health problems is significantly higher in women than in men. It also affects older people and groups with a lower socioeconomic status to a greater extent.

Mental health treatment commonly involves psychological counseling, medication, or a combination of the two. Similarly to the prevalence of mental disorders, the consumption of medication is higher among women, older age groups, and persons with a lower socioeconomic status. For instance, 7.9 percent of non-qualified female workers consumed antidepressants, while the consumption of this kind of medication among women that had jobs associated with university degrees dropped to 3.2 percent. In total, the average daily dosage of antidepressants in Spain was 80.4 per 1,000 inhabitants, a number that has almost doubled since 2004.

The share of the population that had consulted a psychologist, psychotherapist, or psychiatrist in Spain in 2020 reached 4.8 percent, which translates to approximately 1.9 million of individuals. In general, younger generations are more prone to visit a mental health professional, which may be indicative of the destigmatization of mental health in recent years. Nevertheless, there are still stigma and economic barriers to receiving adequate treatment. Although psychological counseling is available free of charge in the Spanish public healthcare system, the reality is that there are not enough resources to provide treatment to everyone who needs it. In many cases, patients have to seek treatment in the private sector.

In the following 6 chapters, you will quickly find the 34 most important statistics relating to "Mental health in Spain". 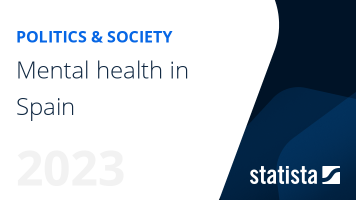 The most important key figures provide you with a compact summary of the topic of "Mental health in Spain" and take you straight to the corresponding statistics.

Mental health treatment in the U.S.