Japan established its modern postal system in 1871, during a period when the country fundamentally reformed its political, legal, and societal structures. Around 150 years later, the government has again transformed postal services, though forging them through privatization and liberalization policies at the beginning of the millennium. Consequently, the state has handed over principal services to private providers sustaining some of today's best-performing postal services in the world - despite a slowly but steadily shrinking number of post offices and post boxes.

The state used to have a monopoly over postal services that even included postal savings and life insurance. But towards the end of the 20th century, lawmakers again deemed structural reforms necessary, although their neoliberal degree was subject to fierce debates. Inside the ruling Liberal Democratic Party (LDP) began a tug-of-war, eventually resulting in a snap election that secured the passing of the privatization bill.
In 2007, the law came into effect, restructuring postal services into the asset-heavy Japan Post Group. It today consists of Japan Post Holding and its subsidiaries Japan Post, Japan Post Bank, and Japan Post Insurance. Wholly-owned Japan Post manages the nationwide network of post offices providing postal, bank, and insurance services. Optional registration, express services, and home shipping label printing diversify letter and parcel products. By law, Japan Post still has a monopoly over postal mail except for certain correspondence.
In October 2021, the government reduced its stakes to around one-third in the holding, thereby completing its role in the privatization process. However, the breakup accompanying privatization remains incomplete as long as the holding has not sold off the two financial firms.

Liberalizations in the correspondence delivery business

Besides separating the financial services from the postal services, the legislator has enabled private companies to deliver correspondence in line with various licenses granted by the authorities. Hence, private companies may theoretically transport correspondence defined as documents addressed to a specific recipient expressing the intentions of the sender or notifying about facts, for example, postcards or letters. Despite this legal door opener, many requirements control market access. As of today, no company has qualified as a ‘general correspondence delivery business’. However, there are three types of ‘specified correspondence delivery businesses’ companies have obtained permits for so far: large or heavy deliveries, express deliveries within three hours, and high postage deliveries.
Parcel delivery may be exempt from correspondence constraints given the containing correspondence is an unsealed attachment dealing with the package contents, such as a receipt of shipment. Therefore, in contrast, private door-to-door parcel delivery services like Yamato Transport or Sagawa Express have business licenses for freight motor vehicle transportation. How do parcel services compete with the massive postal network? Yamato Transport, for example, extends its reach through convenience stores and parcel lockers – but so does Japan Post.
This text provides general information. Statista assumes no liability for the information given being complete or correct. Due to varying update cycles, statistics can display more up-to-date data than referenced in the text.
Alexandru Arba
Research expert covering Japan
Get in touch with us now
Published by Alexandru Arba, Oct 15, 2022 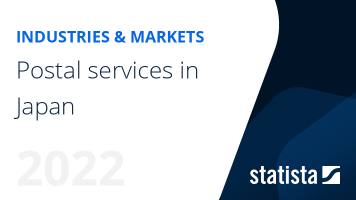 The most important key figures provide you with a compact summary of the topic of "Postal services in Japan" and take you straight to the corresponding statistics.