In May 2022, Broadcom announced its intention to acquire VMware, one of the world’s leading enterprise software companies. The VMware business specializes in cloud computing and virtualization technologies and was previously owned by Dell before being spun off in late 2021 where it stood as a standalone company until the Broadcom acquisition. The transaction, valued at approximately 61 billion U.S. dollars, was expected to be completed in Broadcom’s 2023 fiscal year. As part of the deal, the Broadcom Software Group rebrands and operates as VMware, incorporating Broadcom's existing infrastructure and security software solutions as part of an expanded VMware portfolio.

Broadcom ranked sixth among semiconductor companies in 2021, behind market leaders such as Intel and Samsung. When compared to other fabless semiconductor companies – firms that do not own any production facilities and instead focus on chip design – the company ranked third, with Qualcomm and Nvidia generating more revenue in 2021. As Broadcom operates across a range of markets, the company faces stiff competition from several other firms such as Micron and Samsung for memory and storage solutions, as well as the likes of Cisco and Palo Alto Networks for networking and security products.

In the following 5 chapters, you will quickly find the 25 most important statistics relating to "Broadcom". 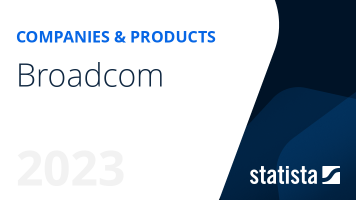 The most important key figures provide you with a compact summary of the topic of "Broadcom" and take you straight to the corresponding statistics.