Obama made a highly memorable visit to Berlin five years ago as a presidential candidate. Speaking at the city’s Victory Column, he was hailed as a messiah by wildly enthusiastic crowds. In 2013, Obamania is long gone, replaced with the harsh reality of the highest unemployment rates in the history of the eurozone with no signs of recovery in sight.

The United States is still struggling under its own cloud of crippling debt while the issue of gun control is dividing the country. Certain promises remain unfulfilled, including the closure of the controversial detention camp at Guantanamo Bay.

Meanwhile, the international community is at odds about how to tackle the crisis in Syria, while the leaked revelations of PRISM have sent chills around the world. Nevertheless, Barack Obama is still Germany’s favorite U.S. president and crowds are expected to turn out en masse when he speaks at the Brandenburg Gate on Wednesday.

It is the same location where Germany’s fourth favorite U.S. president, Ronald Reagan, made his famous “tear down this wall” speech in 1987. Despite a plethora of problems that have manifested themselves since Obama last visited Germany’s capital on that sunny day five years ago, Berliners are still expected to warmly welcome their favorite U.S. president. 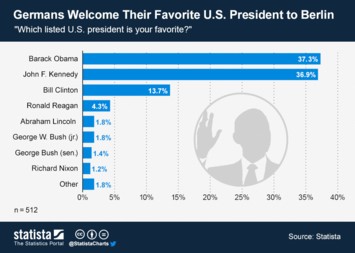 The chart provides a survey on Germany's favorite U.S. president.