Uber reported its fourth quarter and full year results for 2019 on Thursday, delivering more of the same. The ride-hailing giant that recently expanded into food delivery and freight transportation continues to grow like gangbusters but does so at incredibly high cost. In 2019 alone, Uber spent $4.6 billion on sales and marketing and $4.8 billion on R&D, which, combined with other costs and expenses, resulted in an operating loss of $8.6 billion.

Disregarding the cost side for one moment, Uber’s growth looks very impressive, however, with gross bookings, i.e. the total transaction volume for all services booked through Uber, growing to $65 billion last year, up from $49.8 billion in 2018 and $34.4 billion the year before that. Revenue, i.e. the company’s share of gross bookings after paying the drivers, restaurants and accounting for discounts and refunds, climbed to $14.2 billion in 2019, up from $11.3 billion the year before.

Despite its hefty losses, Uber remains positive it can reach profitability sooner rather than later. According to a presentation shared with investors on Thursday, the company plans to break even in 2021, a very ambitious goal considering its current losses. There are signs of improvement, however, as Uber’s EBITDA margin improved from negative 31 percent in Q1 2019 to negative 16 percent in Q4 2019. 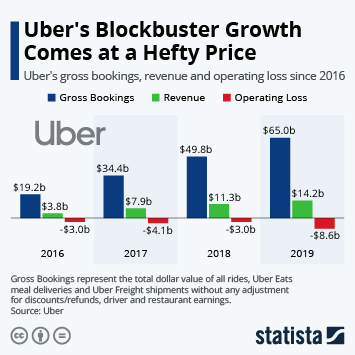