Skip to main content
53k
74.6k
87k
88.9k
In the wake of President Trump's victory in the 2016 election, views of the United States deteriorated around the world and today, they remain at historic lows in many countries, particularly among key U.S. partners and allies. With the second anniversary of election night approaching, Pew Research conducted a survey into views of the U.S. and the president in different parts of the world. While on balance, 50 percent of people polled in 25 countries have a favorable view of the U.S., frustration is evident among America's neighbors, key allies and most important trading partners.

Unsurprisingly favorability is down both north and south of the U.S. border. 66 percent of Mexicans had a favorable view of the U.S. towards the end of Obama's presidency and over 600 days into Trump's first term, that has fallen to just 32 percent. Trump has labeled illegal immigrants from Mexico "rapists" and has pledged to build a wall on America's southern border. He has also opened a trade dispute with Canada and U.S. favorability has fallen there from 65 to 39 percent. The situation is similar in Europe where favorability among key allies such as Germany, France and Spain has evaporated. Views of the U.S. are slightly better in Asia, however, with declines evident but far less pronounced in Japan and South Korea. 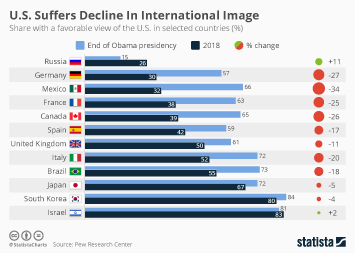 This chart shows the share with a favorable view of the U.S. in selected countries.