Skip to main content
53k
74.6k
87k
88.9k
On Wednesday, President Trump declared a national emergency on the "telecom supply chain", stating that "foreign adversaries" were "increasingly creating and exploiting vulnerabilities in information and communications technology". Those words were clearly directed at Chinese telecommunications firm Huawei, which the U.S. is accusing of fraud, stealing of trade secrets and skirting U.S. sanction against Iran after Huawei CFO Meng Wanzhou was arrested in December. Since then, questions have been raised about whether Huawei is independent enough of the Chinese government to guarantee the integrity of mobile networks using the company's technology. With new 5G networks built around the world, heated discussions and even bans of Huawei products have ensued. The new national emergency declaration constitutes a wide-reaching ban for Huawei products in the U.S.

There have been 60 national emergencies declared in the U.S. since the National Emergencies Act went into effect in 1976. As listed in the Federal Register, 33 remain standing to this day, meaning they must be renewed by the sitting president once a year.

Most of the declarations currently active don’t concern national crises but deal with international or foreign emergencies. While President Trump signed a emergency declaration on Nicaragua in 2018, active declarations on Burundi, Ukraine or Venezuela, among others, date back to the Obama era, while G.W. Bush signed still-active declarations on the Congo, Lebanon and Belarus. President Trump signed a domestic national emergency order in connection to funding for a border wall in February, allocating additional funds to his signature project. Another domestic emergencies was signed by President George W. Bush after 9/11.

Declaring a national emergency gives a U.S. president special powers, like suspending certain laws, authorizing military projects single-handedly and re-allocating defense funds. Out of the 136 emergency powers, only 13 require a sign-off from Congress. 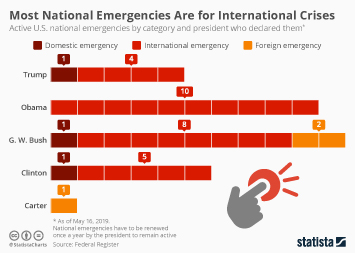 This chart shows all active national emergencies in the U.S. by category and president who signed them, as of May 16, 2019.