UK trade figures for January were released today, revealing a record drop in exports and imports to and from the European Union. At first glance, this may seem like a clear and ominous effect of the Brexit transition ending on 31 December. On closer inspection though, the causes and longer-term consequences aren't quite so black and white.

Firstly, for full context we need to take a look at the month with which we are comparing to. In November and December the ONS reports seeing "increasing imports and exports of goods...These increases were consistent with potential stockpiling of goods from the EU in preparation for the end of the EU exit transition period." This is a phenomenon which was also observed in the run up to the two previous Brexit deadlines in 2019. Looking at the wider picture once more, the start of a new nationwide lockdown at the beginning of January may also have played its part in the decreases.

The disruption to trade at the start of the year has however been well documented, and certainly played a role in the dramatic drop. The main question is whether this represents a new status quo or rather an unfortunate but fleeting Brexit hangover. The ONS cites its own 'Business insights and impact on the UK economy' data which suggests that these 'teething problems' have already begun to ease, with the more granular figures showing signs of trade starting to increase towards the end of the month. Additionally, the share of businesses reporting that they were unable to export/import started to decrease as the month wore on.

The view from outside the ONS though is somewhat more negative. Quoted in The Guardian, Samuel Tombs, the chief UK economist at the consultancy Pantheon Macroeconomics offered this prognosis: “Brexit is best seen as a slow puncture, rather than a sudden blowout, with the costs gradually accumulating in the form of lower investment and immigration than otherwise would have been the case.” Adding to this sentiment, Suren Thiru, the head of economics at the British Chambers of Commerce, said: “The practical difficulties faced by businesses on the ground go well beyond just teething problems and with disruption to UK-EU trade flows persisting, trade is likely to be a drag on UK economic growth in the first quarter of 2021.” 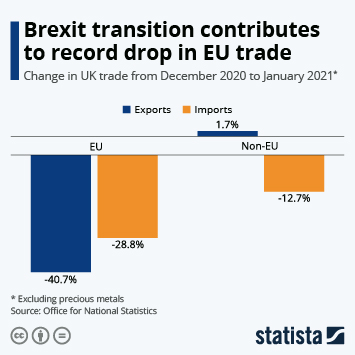 This chart shows the change in UK trade from December 2020 to January 2021.