While the COVID-19 pandemic is far from over, as rising case numbers in various countries sadly illustrate, the recession it brought on to the U.S. economy officially is. And for quite some time, as the official chronicler of U.S. business cycles announced on Monday. According to an official statement from the Business Cycle Dating Committee of the National Bureau of Economic Research (NBER), the U.S. economy bottomed out in April 2020, just two months from its previous peak in February 2020.

According to the NBER’s conventions for chronicling economic cycles, a recession begins in the first month following a peak in economic activity and ends in the month of the subsequent trough. In this case, that means the COVID-19 recession only lasted for two months, making it the shortest on record.

While the protracted length of an economic contraction is usually one of three criteria for determining a recession – depth, diffusion and duration – the NBER states that “extreme conditions revealed by one criterion may partially offset weaker indications from another.” In this particular case, “the unprecedented magnitude of the decline in employment and production, and its broad reach across the entire economy, warrants the designation of this episode as a recession, even if it turns out to be briefer than earlier contractions,” as the committee rightly predicted in June 2020, when it announced the recession.

Identifying the date of a trough/peak in economic activity is a complex task carried out by the Business Cycle Dating Committee, a panel of 10 renowned economic researchers, that involves weighing the behavior of various indicators (e.g. real GDP and total payroll employment) to pinpoint turning points in economic activity as accurately as possible. As the NBER notes, the end of a recession should not be mistaken for a return to pre-recession economic activity. “Economic activity is typically below normal in the early stages of an expansion, and it sometimes remains so well into the expansion.” 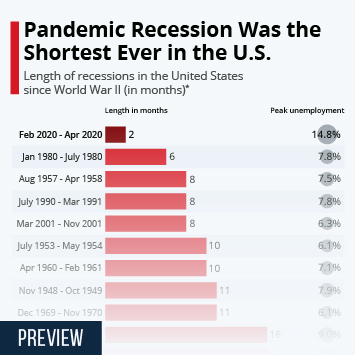 This chart shows the length of recessions in the United States since World War II.