One argument often brought up against the transition to electric cars is the assertion that, all things considered, electric vehicles aren’t that much cleaner than internal combustion engines. Once you take into account battery production and electricity generation, the emissions savings of electric vehicles are minimal at best, so the popular argument goes.

To tackle this argument, the International Council on Clean Transportation (ICCT) published a white paper this month, comparing life-cycle greenhouse gas emissions of combustion engine and electric passenger cars. Taking into account emissions associated with vehicle and battery manufacture, maintenance, fuel consumption and fuel/electricity production, the study finds that electric cars do in fact cut emissions significantly, even in countries where the transition to renewable energy in the electricity mix is still in the early stages.

As illustrated in the following chart, emissions over the lifetime of a mid-sized electric passenger car registered today are already considerably lower than those of a comparable gasoline car. Depending on the current electricity mix and its evolution over the lifetime of the vehicle, emissions savings range from 19-34 percent in India to 66-69 percent in Europe. Moreover, as the decarbonization of energy generation progresses further, the emissions gap between BEVs and cars with combustion engines is expected to widen substantially for cars registered in 2030.

Widening the scope to consider other fuel types as well, the report finds that battery electric vehicles and fuel cell electric vehicles, powered by renewable electricity and green hydrogen, respectively, are the only technologies capable of achieving the emissions reduction in global road transport needed to meet the goals set in the Paris Agreement. Hybrids and plug-in hybrids, the report finds, could be used to reduce fuel consumption during the transition, “but neither provide the magnitude of reduction in greenhouse gas emissions needed in the long term.” 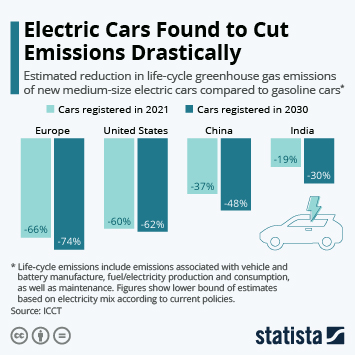