The extremely rich in post-Soviet countries are often called oligarchs. The term is of Greek origin can be loosely translated as “the rule of few”. While the word has become a source of dispute after the Russian invasion of Ukraine that entailed heightened scrutiny of Russia’s ultra-wealthy, it is true that Russian billionaires are outstandingly rich compared to the size of the Russian economy that generated that wealth.

A good chunk of that money has since evaporated, an analysis of the Bloomberg Billionaires Index shows, as the Russian economy virtually collapsed and a worldwide selloff of Russian assets ensued after the country started the war with Ukraine.

Yet, billionaire wealth compared to GDP in Russia was still higher as of March 10 than in the U.S., Canada and several European countries. Looking back at February 23, when billionaire wealth still stood at almost 21 percent of Russian GDP, shows how extraordinary the position of the Russian ultra-wealthy class really is.

According to The Economist, approximately 85 percent of Russian billionaire wealth can be attributed to the so-called crony sector, where business and political power players work together to share profits and favors. Russian President Vladimir Putin has been known to use this class of the loyal and influential to cement his power for years. Out of the country’s richest mentioned on the Bloomberg Billionaires Index, Gennady Timchenko of investment firm Volga Group appeares on the UK sanctions list, while Petr Aven of ABH Holdings, Mikhail Fridman of Alfa Group and Alisher Usmanov of Metalloinvest are being sanctioned by the EU.

The U.S. also exhibited an extraordinarily high billionaire wealth at between 14-15 percent of GDP. But despite the fact that the United States is home to around 35 percent of all the billionaires listed on the Bloomberg index, including the top 9 individuals with net worths between $95 billion and $221 billion, Russian billionaires are still richer in comparison to their country’s economic output.

France, India and Canada also ranked high for the wealth-to-GDP ratio. In their cases, the outcome is driven by extremely wealthy individuals that eclipse the wealth of other billionaires in the countries. They are Bernard Arnault of LVMH (net worth $138 billion) and L’Oreal heiress Francoise Bettencourt Meyers ($78 billion) from France, Reliance chairman Mukesh Ambani ($87 billion) and port operations magnate Gautam Adani ($84 billion) from India and Changpeng Zhao of Binance ($67 billion) from Canada. The second-richest Canadian, Sherry Brydson of investment firm Woodbridge, which controls Thomson Reuters, has a net worth of only $14 billion.

Despite China’s large economic output, the richest Chinese, bottled water tycoon Zhong Shanshan, currently only has $66 billion to his name. The second-richest Chinese, Zhang Yiming of of TikTok owner Bytedance, has a net worth of only $45 billion, contributing to the country’s modest result of a 5.7 percent billionaire-wealth-to-GDP ratio as of March 10.

Second-ranked Sweden, on the other hand, hosts an oversized number of very wealthy billionaires from the worlds of business and aristocracy in a small country. The interests that control global players like H&M, Securitas and Tetra Pak reside here. The fortunes of Ikea founder Ingvar Kamprad, on the other hand, were dispersed upon his death in 2018.

The ratios used in the chart are based on calculations by the Bloomberg Billionaires Index which includes the 500 richest individuals in the world, most recently showing individuals with a net worth of around $5.2 billion and upwards. 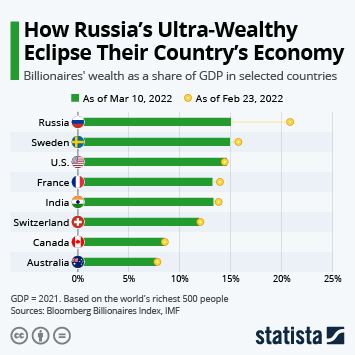