When Tesla revealed the latest addition to its electric vehicle lineup, the Cybertruck, in November 2019, it definitely turned some heads. With its bold design, reminiscent of something you might see in a science fiction movie, it's hard to picture the Cybertruck in everyday traffic, despite it being 2020 aka the future.

"It’s gonna be like a really futuristic-like cyberpunk, “Blade Runner” pickup truck," Elon Musk said in 2018, when talking about the secret Tesla truck project, and it seems fair to say that he delivered on that promise. While not everybody was impressed with the Cybertruck’s brute looks, pre-orders appear to validate Tesla’s go-big-or-go-home approach in this case.

According to estimates from Wedbush Securities, Tesla already received 650,000 pre-orders for the Cybertruck, which is scheduled to hit the roads in late 2021. If many of those pre-orders convert to actual sales, which is anything but certain considering the small $100 deposit, most buyers will have to wait a lot longer than that though. Considering that Tesla delivered just 367,500 vehicles in 2019, 650,000 quite literally seems like a tall order for the electric car maker. 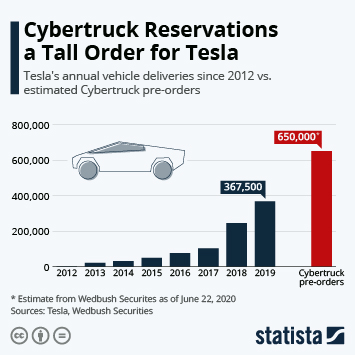 This chart compares the number of pre-orders Tesla received for the new Cybertruck to the company's vehicle deliveries between 2012 and 2019.