Skip to main content
53k
74.6k
87k
88.9k
The ballot boxes are finally being filled for the United Kingdom referendum on membership of the European Union. The debate has been divisive, to say the least, with both 'Remain' and 'Leave' camps being branded with terms such as 'project fear' and 'project hate'.

Hate has indeed been at play, manifesting itself in the most terrible of ways with the brutal murder of pro-EU MP Jo Cox last week. With the 'Leave' (aka Brexit) campaign focusing heavily on immigration from the EU and prospective EU countries, some voters have been left feeling unrepresented - pro-Brexit but not willing to associate themselves with the increasingly dangerous rhetoric coming from some key 'Leave' figures.

Needless to say, the polls have been very tight in recent days. One of the latest results from YouGov showed a one point difference in favour of 'Remain', while others have it neck and neck. In Europe however, as the infographic below shows, the feeling is generally in support of the UK remaining in the EU, with 70 percent saying it would be a bad thing if a Brexit were to occur.

Despite all the bluster from politicians, a poll by Ipsos Mori shows that only 12 percent of people hold any trust in those in power when it comes to the referendum. Way out in front are friends and family members with 73 percent and academics with 66 percent. Such is the complexity of the debate, however, even academics and experts consistently fail to agree on the potential outcomes of a vote to leave. As illustrated below, the effects on GDP are forecast to be anywhere from a 7.5 percent drop to a 4 percent increase.

The future of the United Kingdom and the EU truly hangs in the balance today. Whatever the result (due Friday at roughly 04:00 BST), the political ramifications will be massive. 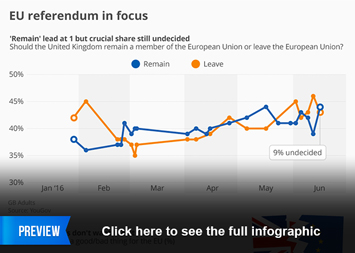 This chart provides a focused look at the United Kingdom EU referendum.