88.9k
Have you ever wondered how Apple could become the world’s most valuable company? After all, the Californian iPhone maker sells electronic devices, not oil nor arms. A recent Gartner report gives us an idea of how big the global market for computing devices (incl. mobile phones, PCs, tablets and similar devices) really is. According to the company’s estimates, end users spent nearly $600 billion on such devices last year, a figure that the market research firm expects to grow even further until at least 2019.

Mobile phones account for the lion’s share of global device spending and Apple plays a big part in that. The company’s iPhone revenue in 2016 amounted to $139 billion or more than 35 percent of global end user spending on mobile phones. Interestingly Apple sold “just” 215 million iPhones in the past year, which gives them a market share of 11 percent in terms of unit sales. The same holds true for both the PC and the tablet market, where Apple’s market share in terms of value is also significantly higher than it is in terms of sheer volume.

The fact that Apple sells its devices at much higher prices than the market average is no surprise. How large the company’s market share in terms of dollars spent is, especially in the mobile phone and tablet markets, is impressive nonetheless. 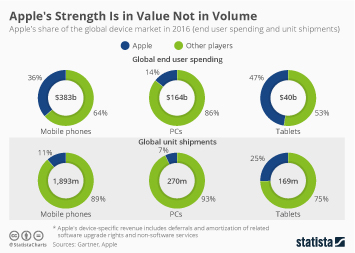 This chart shows Apple's share of the global device market both in terms of value and volume.