Published by Statista Research Department, Dec 3, 2020
Domestic travel refers to trips taken by tourists within their country of residence and outside their usual environment, such as an overnight stay or as a day visit. In the European travel industry, domestic tourism is a valuable market, contributing more to GDP than international tourists. 23 percent of EU travelers participated in only domestic travel in 2015 and domestic travel industry expenditure is estimated to reach just under 959 billion euros in 2017.
Although many travel for business and work related reasons, domestic trips are generally taken for vacation, recreational and other leisure purposes. In Great Britain, domestic travel spending is highest for holidays and visiting friends or relatives, with over 55 million ‘staycations’ taken by British holidaymakers in 2016. Similarly in the Netherlands, the number of domestic holidays taken is almost as high as holidays abroad.

Despite a large number of domestic arrivals in tourist accommodation, domestic tourists in many countries are less likely to stay in traditional travel accommodation. In Spain for example, residents are more likely to stay with family or friends or at their own property when staying overnight. This is similar for travelers in Iceland, however tents, trailers and motor homes are also a popular option.

The most used mode of transport for domestic trips lasting more than one night is overland by car or other owned vehicle, likely due to the relatively small size of many popular European countries and the ease of traveling by car. Other modes of transportation used vary by country. Travel by rail, for instance, is a more popular mode of transport among German tourists compared to other countries.

Choice of destination often depends on the length of the trip and the geographical nature of the country. For example, in Britain most day trips in 2015 were taken to a city or town, although seaside and countryside destinations are also visited. For longer overnight trips, Europeans tend to head to rural rather than urban destinations. Italian tourists, for example, take more domestic holidays on the coast, on cruises or in the mountains. Such vacations also tend to be longer, as can be seen with the length of travel by French tourists; they were likely to spend around a week on the coast or in the mountains, compared to 3 or 4 days in a city.

The most important key figures provide you with a compact summary of the topic of "Domestic tourism in European countries" and take you straight to the corresponding statistics. 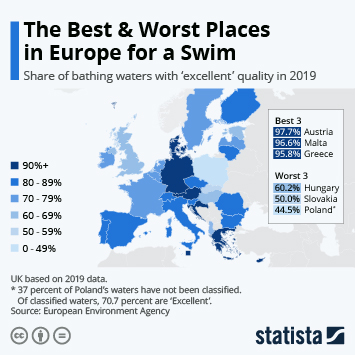