Published by
Christina Gough,
Jun 15, 2021
The Seattle Seahawks are a professional football team that competes in the National Football League (NFL) in the league's National Football Conference (NFC) West division. The team joined the NFL as an expansion team in 1979 and has appeared in three Super Bowls, winning the championship once in 2014.
The Seahawks play their home games at CenturyLink Field in downtown Seattle, Washington. In 2019, their average regular season home attendance amounted to 68,990 and the average ticket price for a Seahawks home game in that same year was estimated at 111.79 U.S. dollars. The team, which currently has a franchise value of around three billion U.S. dollars, is owned by Microsoft co-founder, Paul Allen. In 2019, the franchise generated revenue of around 472 million U.S. dollars and its operating income for that year amounted to 112 million U.S. dollars.

Being the only NFL team from the Pacific-Northwest, the Seahawks attract support from a wide geographical area and have fans all over the world. As of March of 2020, the team had a combined total of more than six million followers on Twitter and Facebook.

In the following 4 chapters, you will quickly find the 23 most important statistics relating to "Seattle Seahawks". 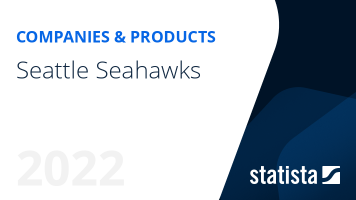 The most important key figures provide you with a compact summary of the topic of "Seattle Seahawks" and take you straight to the corresponding statistics.