Published by
Christina Gough,
Jul 1, 2022
Cricket is one of the most popular sports in the world, with fans across the subcontinent, Australasia, the United Kingdom, and further afield. The game’s governing body, the International Cricket Council (ICC), has over 100 members, of which 12 are full members eligible to play Test matches. The oldest form of the game, Test matches, are traditionally played in all-white kit over a maximum of five days, with both teams batting for two innings. The two other main formats of international cricket are limited overs games – 50 overs and 20 overs.

The ICC regularly releases rankings for both male and female teams and individuals in all formats of cricket to show who is currently on top of their game. The leading run-scorer of all time in men’s test matches is India's Sachin Tendulkar. Nicknamed "The Little Master", Tendulkar scored 15,921 in his test match career spanning from 1989 to 2013. The leading wicket-taker of all time in international tests is Sri Lanka's Muttiah Muralitharan. The spin bowler took 800 wickets in a test career spanning from 1992 to 2010. He famously registered his 800th and final wicket from the final ball of his Test career in July 2010.

One of the most famous contests in Test cricket is played at least once every two years between England and Australia. The five-game series, called The Ashes, has taken place between the two rivals since 1882, with the team from down under just edging ahead of England in terms of number of series won. The most recent Ashes series took place in Australia in 2020/21. Australia won the five-match series 4-0, thereby retaining the Ashes and the famous urn trophy. Legendary Australian batsman, Sir Don Bradman, leads the way in terms of all-time Ashes runs scored, having amassed 5,028 runs in 63 Ashes innings at an average of almost 90.

In the shorter format of the men’s game, two separate World Cups are contested each on a two or four-year basis. The ICC Cricket World Cup is a 50-over competition first held in 1975 and most recently contested in England and Wales in 2019. The hosts emerged victorious after a gripping final against New Zealand that went down to a Super Over. This was England’s first World Cup success, making them the sixth different team to have lifted the trophy. The Australian cricket team has won the World Cup a total of five times, including on three consecutive occasions between 1999 and 2007. The ICC Men’s T20 World Cup was first held in 2007 and most recently took place in the United Arab Emirates and Oman in 2021. This edition of the tournament was won by Australia for the first time in the country's history, with New Zealand once more ending up on the wrong side of a tense final.

On the domestic stage, one of the biggest and most lucrative tournaments in the world is the Indian Premier League (IPL). First contested in 2008, the league consists of 10 teams split into two groups of five. The 14th season of the IPL in 2021 was won by the Chennai Super Kings, marking their fourth title win and their first since 2018. The franchise plays its home games at the M. A. Chidambaram Stadium and boasts the highest number of Twitter followers out of any team in the league. In a similar format to the NFL draft, players can be acquired by IPL teams during the annual player auction. Unsurprisingly, some of the household names in Indian and international cricket are snapped up for large amounts of money. Indian captain, Virat Kohli, topped the earnings list during the 2021 season, with his salary for Royal Challengers Bangalore reaching an estimated 2.66 million U.S. dollars.

Women’s cricket has gone from strength to strength in recent years with more professional contracts being handed out on both a domestic and international level. While the number of female international Test matches being played is still very limited, the one-day and T20 game is becoming increasingly competitive. Australia and England, who have the most extensive and professional domestic set-ups, can be regularly found near the top of the ICC rankings for both ODI and T20 cricket.

In the following 5 chapters, you will quickly find the 45 most important statistics relating to "Cricket".

The most important key figures provide you with a compact summary of the topic of "Cricket" and take you straight to the corresponding statistics.

Cricket in the United Kingdom (UK) 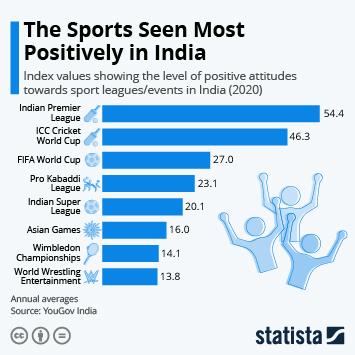