In the world’s most populous country, online dating has become a profitable industry as 200 million Chinese are eager to find a partner. For every 100 females aged below 30, there are over 110 males; overall, there are about 33.7 million more men than women in China. Such a skewed sex ratio has developed owing to the decades-long one-child policy and a preference for boys. The gender imbalance has given rise to dating, matchmaking, and relationship counseling services. In 2022, the annual revenue of China’s online dating and matchmaking businesses was estimated to surpass eight billion yuan.

What are the Chinese dating characteristics?

In contrast to the casual “hook-up” dating culture associated with online dating in the West, a significant amount of Chinese customers use the services to seek long-term relationships and possibly marriages. In fact, family is a very important concept in Chinese culture, and marriage is regarded as the most significant milestone of adulthood. Unmarried men over 30 and women at the age of late twenties are labeled “leftovers”. However, their growing prosperity is making them pickier. The common belief of a prospective partner with a similar social-economic status still exists today. It comes as no surprise that more and more young people choose to stay single because of a limited social circle or career pursuits. Sick of unsuccessful blind dates arranged by their parents, many Chinese singles are open to try online dating services.


How are the domestic market players doing?

Local companies understand the importance of material security and marriage-oriented relationships in Chinese dating preferences. Questions about personal financial status are often asked in dating profile settings. Baihe Jiayuan is one of the country’s largest dating platforms that cover one-stop services from online matchmaking and offline events to relationship counseling and wedding planning services. After Baihe merging with its former rival Jiayuan and reported several times of annual net loss, the dating giant announced to terminate its listing on the Chinese stock market in October 2019. In fact, its major domestic contenders Zhenai and Youyuan had experienced hindrances in the attempt of going public. The prospectus from Youyuan showed a continuous sales revenue loss between 2015 and 2017.

Is online dating and matchmaking a profitable business?

It is hard to say that online dating and matchmaking in China has a positive market outlook just base on a growing consumer size. The practice of tricking consumers into pay with bundling, misleading terms and conditions, and romance scammers are quite prevalent in the industry. Customer complaints regarding data privacy and after-sales service problems are also common. Besides, online scams organized by criminal groups have been surging in the online dating scene. Market observers have pointed out that clear regulations are needed to protect consumer rights.
This text provides general information. Statista assumes no liability for the information given being complete or correct. Due to varying update cycles, statistics can display more up-to-date data than referenced in the text.
Lai Lin Thomala
Research expert covering Greater China
Get in touch with us now
Published by Lai Lin Thomala, Apr 8, 2022

Number of singles and adults living alone in China 2018

Revenue of online dating and matchmaking market in China 2015-2022

Revenue of online dating and matchmaking market in China 2015-2022

Number of online users of dating services in China 2017-2026 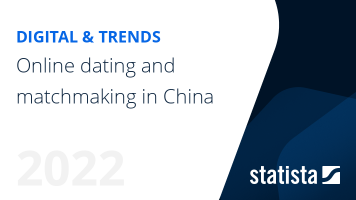 The most important key figures provide you with a compact summary of the topic of "Online dating and matchmaking in China" and take you straight to the corresponding statistics.