Published by
Dominique Petruzzi,
Feb 16, 2022
In the beauty sector, skincare is having a moment. As new products and more refined routines hit the market and beauty columns, the industry gets a new glow from increased sales. It seems the rejuvenation will be a lasting one as well, as the size of the global skincare market is expected to reach sky-high figures by 2026.
In Great Britain, the skincare market, including cosmetic and dermo-cosmetic skin creams, hand and lip care products, sun screens, and body lotions, reached a value of 2.16 billion British pounds by the end of 2019. Within the market, non-medicated face care typically holds the highest value. This is followed by prestige skincare - products that tend to have a heftier price tag than the mass-produced, drugstore available brands. In total, facial skincare for women is worth nearly 1.5 billion British pounds as of December 2019.

Among UK women, some of the most popular face creams were from generic brands such as the Germany-based Nivéa and the UK’s own Boots No. 7. More detailed consumer studies showed that Nivéa’s sun lotions were in fact the brand’s most preferred product.

Facial care is something that British women pay attention to, with an overwhelming majority of them saying they moisturize and tend to their face on a regular basis. Keeping the skin hydrated knew no gender either, as impressive numbers of British men reported using products such as masks, scrubs and anti-age creams on top of skincare staples such as moisturizers.

Other skincare products that have considerable shares in the market are body care and sun preparations. Sun care products in particular saw a surge in market value in 2018. This could be explained by an increased emphasis on the significance of applying sunscreen as part of routine skincare regimes; not just to get protection from the sun, but also to keep the skin from aging. Similarly, the most recent figures for the body care market indicated that this market has performed significantly better in 2019 compared to previous years which saw fluctuations .

As is the case across almost every industry, within skincare as well there is a demand for ethical products and manufacturing. While in the United Kingdom, there is a substantial number of skincare brands that trade as “ethical” companies, there are also other retailers on the mainstream spectrum that adhere to ethical policies. Lush and The Body Shop are two of them,the former of which is among the leading 20 ethical skincare brands, as found by Ethical Company Organisation in 2020. In any case, both companies renounce animal-testing on their products, and the majority of Lush products (at 85 percent) is vegan.

In the following 5 chapters, you will quickly find the 23 most important statistics relating to "Skin care in the UK".

Statistics on the topic
Market value of prestige skin care in the UK
495.5m GBP
Skin care cosmetic products with the highest market value in the UK
Face care non-medicated
Value of men's facial care and moisturizing products market in the UK in 2018
33.1m GBP 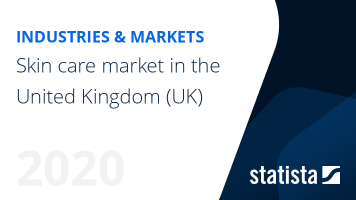 The most important key figures provide you with a compact summary of the topic of "Skin care in the UK" and take you straight to the corresponding statistics.

Men's grooming and cosmetics market in the United Kingdom (UK)