Public debt, also know as sovereign debt or national debt, is the amount owed by a government to its lenders, which can be foreign (external debt) or from within the country (internal debt). Governments create debt through many ways, for instance, by issuing bonds or borrowing from international institutions. On the other hand, it compensates such payment obligations with revenues collected via taxes, for example. A budget deficit (when government’s expenses exceed revenues) implies enlarging the volume of the outstanding public debt.
Public debt comes at a cost to the public, as interest payments absorb government resources that could otherwise be used for additional public services. For instance, the cost of servicing the foreign debt in Latin America and the Caribbean amounted to 565.1 billion US dollars in 2021.

Coronavirus and the worsening of the sovereign debt

Like most countries around the world, Latin American nations have seen their public debt inflate as a result of the economic cost of handling the COVID-19 pandemic. As the former led to a shrinking of the Latin American countries’ GDP, the relative burden of the public debt increased significantly. By 2022, two years after the outbreak of the pandemic, most countries in the region still had a sovereign debt which exceeded half their GDP. The debt held by Venezuela's public system represented 307 percent of the country's annual production, making it the most indebted economy in the region. Even countries with historically low level of indebtness, such as Chile, are expected to see their national debt soar in relation to gross domestic product.

A significant and increasing portion of the region's debt is external, that is, owned by foreign creditors, or held in foreign currency, like the case of Colombia. Consequently, the depreciation experienced by many Latin American currencies due to the pandemic implied an increase of the external debt burden. All things considered, the public debt-to-GDP ratio in the region is forecast to remain around 71 percent during the next years, while less than a decade ago it stood below 50 percent.

The economic and financial situation of Argentina has been nothing but tumultuous during the last decades. Among the milestones since the beginning of the 21st century, it is worth mentioning the corralito, two sovereign defaults, massive debt restructurings, loss of access to international capital markets or the largest bailout of the IMF’s history. As of 2021, the Argentinian government's debt held in foreign currency represented 56 percent of its GDP and its external debt amounted to 31.8 percent of the national product. Most of this debt is owed to the IMF which, in 2018, under the government of Mauricio Macri, granted its largest loan package ever, a record-breaking bailout which failed to prevent Argentina from entering into recession. The economic turmoil provoked by the coronavirus pandemic aggravated the already dire situation, worsening the Argentinian public deficit as GDP growth plummeted, and pushing the nation into a third default followed by another debt-restructuring deal due to the country’s inability to meet its payment obligations. After the government of Alberto Fernández restructured part of the debt with foreign private holders and the IMF in 2020, both the debt in foreign currency and the external debt experienced a considerable decrease, falling by 23 and 15 percentage points in relation to GDP, respectively, between that year and 2021.
This text provides general information. Statista assumes no liability for the information given being complete or correct. Due to varying update cycles, statistics can display more up-to-date data than referenced in the text.
Published by Teresa Romero, Jun 9, 2022

Government debt in relation to GDP in LAC
72.04%

Lowest government debt as a share of GDP
Guatemala

Latin America: foreign debt as share of GDP 2020, by country 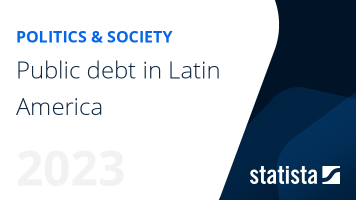 The most important key figures provide you with a compact summary of the topic of "Public debt in Latin America" and take you straight to the corresponding statistics.