Published by
Aaron O'Neill,
Nov 17, 2022
With technology playing a major role in people’s lives, children are becoming exposed and learning how to use it at increasingly younger ages. In most societies around the world, children use electronic devices daily; for instance, when they watch TV or videos, play video games on gaming consoles, or surf the internet on smartphones or PCs. On the one hand, children’s use of technology has its advantages, such as the development of digital literacy skills and multitasking, as well as the ability to connect with family and social groups sharing the same interests. However, it is known that the use of certain technologies by children can also have negative effects. For example, health and social interaction issues, exposure to harmful content, and cyberbullying. For these reasons, parents should try to create a healthy and safe digital environment for their children.

Consumption in the United States

In the United States, children and teens have access to all kinds of electronic devices in their homes, such as smart TVs and video game consoles. Subscription streaming devices and VR headsets have been gaining in popularity in recent years and have become more common in American households. Moreover, almost all children between the ages of 13 and 18 own a smartphone, while most of them have also a tablet or PC.
American children engage in many media activities on electronic devices, such as watching TV and online videos, playing games, and video chatting. In 2021, over 62 percent of them watched TV daily, while 30 percent surfed the internet every day. Furthermore, social media platforms play a large role in American children’s lives, with TikTok and Snapchat being the most popular platforms, on which they spent around 99 and 84 minutes respectively each day on average in that same year.

Like in the United States, children have access to many electronic devices in Europe. For instance, in 2020, 90 percent of British children and 99 percent of German children had internet-enabled devices at home, such as PCs and laptops, and smartphone ownership is common among children aged five or six and upwards in the United Kingdom and Germany. In Italy, most kids use their smartphones or tablets even when in the company of others, while less than half of French kids use smartphones. In Europe, watching videos, playing video games, browsing websites, and using social media are children’s main activities on electronic devices. For instance, watching TV is one of German children’s favorite media activities, while Italian kids use these devices to play online games and watch cartoons. By contrast, British children, most of whom have a social media profile, spend quite some on social platforms, as do French children, who use them mostly to communicate with their family and friends. Indeed, given how relevant the internet is in young people's lives, it is important to guarantee a safe experience and prevent negative online interactions as much as possible.

In the following 4 chapters, you will quickly find the 21 most important statistics relating to "Children and technology ". 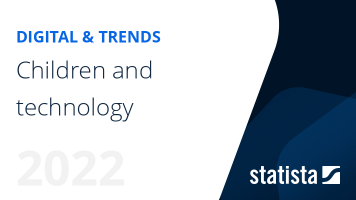 The most important key figures provide you with a compact summary of the topic of "Children and technology " and take you straight to the corresponding statistics.

Children and media in the U.S.

Social media and children in the UK