Skip to main content
53k
74.6k
87k
88.9k
An online survey conducted by the Harris Poll found that in 2015, just under half of all U.S. millennials had a tattoo. Given the rise of tattoos, levels of regret have increased as well, though the vast majority of people never look back after getting one. Nevetheless, the survey found that nearly a quarter of people (23 percent) regret their decision, up from 14 percent in 2012. Where are people actually taking action and removing their tattoos? The International Society of Plastic Surgeons revealed the top countries for removal procedures in 2016.

India has a tradition in body art that can be traced back to ancient times. In more recent years, tattoos have gone from being deeply cultural to something more modern and connected to style. As in other countries, demand for ink went up in India and that in turn led to an increase in demand for removal services. Last year, India had 22,860 tattoo removal procedures, the highest number worldwide, more than likely due to the country's huge population.

Japan comes second with 20,159 procedures while the United States is in third position with 14,124. Italy is in fourth position and Taiwan rounds off the top five. People regret their tattoos and make the decision to remove them for a whole host of reasons. Sometimes it's just as simple as a tattoo not turning out as well as somebody originally envisaged. Then there are the classic horror stories like a drunken visit to the tattoo parlour or somebody deciding to get their lover's name inked before a breakup. 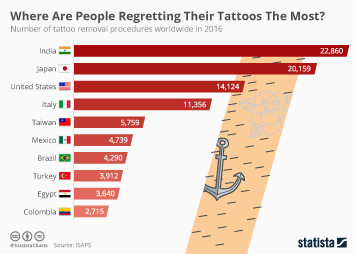