40k
57k
41k
9.6k
The Camp wildfire has now become the deadliest wildfire in California’s history. The wildfire, which began late last week in Northern California, is also the most destructive, destroying about 7,100 structures, most of which are homes.

In addition to the Camp fire currently blazing around the city of Chico, there are two other major wildfires in Southern California. The Woolsey Fire is burning west of Los Angeles. The fire has destroyed homes in Malibu, home to many celebrities, and Thousand Oaks, which just faced a mass shooting last week. The Hill Fire is 85 percent contained in Ventura County.

Fires last year forced the state to pay close to $10 billion in damages. At this point, the number of fires and acreage burned this year is higher than the same six-month period in 2017 and 2018, totaling far above the five-year average. There have been 830,846 acres burned by wildfires in the state, about four and half times as big as New York City.

The Western state’s continuous battle with drought along with unusually high temperatures and dry vegetation have contributed to the devasting, destructive fires this year. 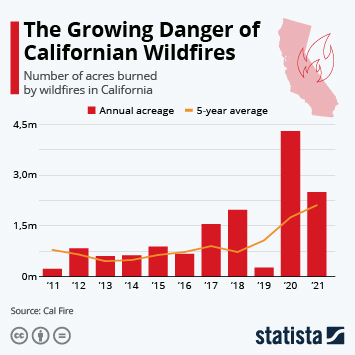 This chart shows the acreage burned in wildfires across California in 2018.