53k
74.6k
87k
88.9k
Six months after having been banned by the city of San Francisco, electric scooter sharing services are returning to the west coast metropolis. Starting Monday, the companies Skip and Scoot will deploy their electric scooters throughout the city with the official blessing of the San Francisco Municipal Transportation Agency (SFMTA).

Back in March, a couple of companies had started dockless e-scooter sharing services in the city without permission, only to be banned several weeks later after numerous reports of scooters cluttering sidewalks and ending up in places they didn’t belong. The city of San Francisco subsequently passed a law forbidding the operation of scooter sharing schemes without a permit and invited companies to apply for a temporary permit as part of a pilot program. Having received 12 applications, the SFMTA ultimately granted permits to Scoot and Skip, snubbing all applicants that had launched their services without permission in March as well as more famous companies such as Uber and Lyft who had also applied.

Despite the bad reputation that e-scooters quickly earned in San Francisco – the city reportedly received nearly 1,900 complaints in less than a month – many Americans still like the idea of electric scooters improving last-mile mobility in urban areas. According to a survey of 7,000 individuals conducted by Populus earlier this year, 70 percent of Americans living in major cities share a positive view of electric scooters. Interestingly, San Francisco is a notable exception with only 52 percent of respondents from the city viewing scooters positively. It seems that the unregulated influx of scooters in March may have left its mark on collective memory in the Bay Area. Once ridden, twice shy? 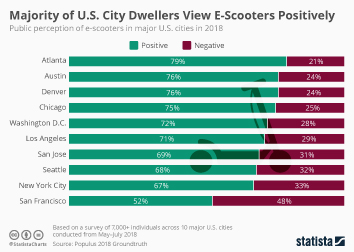 This chart shows the public perception of e-scooters in major U.S. cities in 2018.