40k
57k
41k
9.6k
With the U.S.-North Korea summit underway in Hanoi, less Japanese think there will be a solution to the North Korea missile and nuclear threat in the region. 53 percent of survey respondents said they believed a solution could be found, down from 66 percent in May 2018, ahead of U.S. President Trump's and North Korean leader Kim Jong-un's last summit in Singapore.

With Japan being a close neighbor to nuclear power North Korea and Far-East Russia, the country has been of strategic importance to the U.S. for decades. The Americans have long had a military presence in Japan and the ongoing conflict with North Korea has certainly been one of the reasons for them to stick around. As part of the survey by The Yomiuri Shimbun, 59 percent of Japanese said that U.S. military bases were useful to Japanese security.

Even though U.S. bases, like the ones on the island of Okinawa, are an important economic factor, many local residents see the U.S. presence critically. After incidents of rape by U.S. military personnel in Okinawa, opposition to the bases mounted. In a non-binding referendum on Sunday, 72 percent of Okinawa residents voted against the base being moved to a different part of the island, rather having it be moved somewhere else entirely. Out of all Japanese, 36 percent said they supported the base being moved, with 47 percent saying they did not.

The U.S. bases in Okinawa were the third single largest contributor to the island’s economy and employ approximately 8,700 Okinawans. 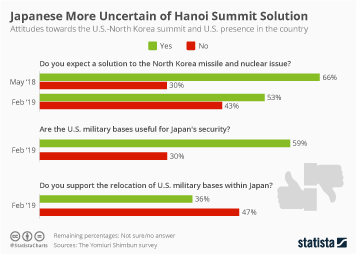