Skip to main content
53k
74.6k
87k
88.9k
After a second bruising defeat for May's Brexit deal, a 'no deal' situation has never looked more likely - what will that mean for the UK and its economy? In this infographic we take a look at a selection of forecasts that paint a picture of the country in a no deal scenario.

Over the next fifteen years, the North East of England could experience a fall of 10.5 percent in gross value added (GVA) to the economy. According to Confederation of British Industry (CBI) forecasts, the region will be the worst affected, with the West Midlands and Yorkshire and the Humber in joint second with "nearly 10 percent". Northern Ireland, which is heavily reliant on trade with the EU (74 percent of all exports), is forecast to see a 9.1 percent drop.

Figures released by the government at the end of last year forecast that, over 15 years, May's Brexit agreement terms would have led to the economy shrinking by 3.9 percent compared to today's arrangements. Even bleaker is of course the prospect of no deal - a devastating drop of 9.3 percent can be expected. On the job front, a report from the UK Trade Policy Observatory and the University of Sussex predicts that almost 750,000 jobs will be lost as a result of a no deal exit, representing 2.5 percent of all jobs in Great Britain. 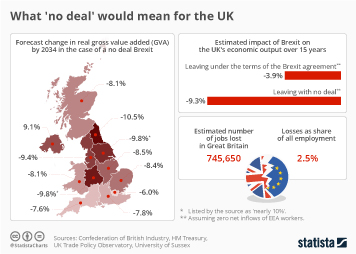 This chart presents selected forecasts related to the impact of the UK exiting the EU without a deal.

Opinions on the European Union