Lake Mead National Recreation Area was the deadliest area controlled by the National Park Service, at least between 2006 and 2016, with a mix of drownings, boat and traffic accidents, medical problems, suicides and even homicides adding up to about 25 deaths per year. Second on the list is Yosemite National Park with an average of 15 deaths annually, with climbing and hiking accidents playing a bigger role. The hot springs at Yellowstone National Park have claimed a total of 22 lives over the years. At Golden Gate National Recreation Area, an above-average number of people die due to rip currents while swimming. Deaths involving the Golden Gate Bridge are excluded. 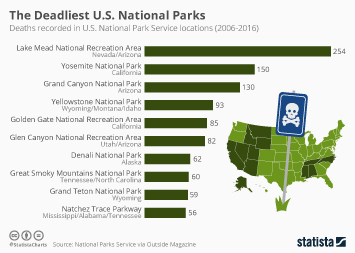 This chart shows the U.S. National Parks and National Recreation Areas where most deaths occured between 2006 and 2016.