Skip to main content
53k
74.6k
87k
88.9k
The European elections are underway. But just like not every member state is getting the same number of seats in the EU parliament, not every country’s contribution to the EU budget is the same. Individual contributions, which is where most of the EU's budget comes from, are calculated as a percentage of member states’ GNI (Gross National Income). The EU also levies a 0.15 to 0.3 percent VAT in its member states and generates revenue from tariffs on imports at its borders.

Five countries are contributing most of the EU's budget: Germany, which contributed 21.6 percent in 2018, the UK with a contribution of 15.6 percent, France with a share of 15.2 percent, followed by Italy (11.1 percent) and Spain (7.6 percent). The budget is then distributed fairly among the Member States, with the four main benefactors receiving less then they put in, making them net contributors. The Netherlands, Belgium, Luxembourg, Sweden, Denmark and Finland are also getting less out than they put in. Lesser developed states are benefiting, making them net beneficiaries.

In 2018, the EU budget was around US$178 billion, with the biggest item on the expenditure list being sustainable development and natural resources (including agriculture), representing 37 percent of the budget. Second up was economic, social and regional development (34.7 percent) and competitiveness, growth and employment (13.7 percent). 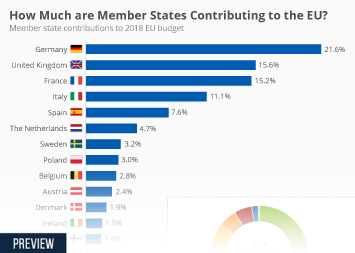 This chart shows member state contributions to the 2018 EU budget in percent.