Out of the 39,773 gun deaths that took place in 2017, 60 percent of them were suicides, according to the CDC. The most recent data that the CDC has available shows that 2017 was the worst year for gun deaths since 1968. Despite an uptick in deaths, the gun murder and suicide rates in the U.S. are both lower now than they were in the mid-1970s.

Though homicides make up 37 percent of gun deaths, the prevalence of suicide in firearm deaths, makes suicide prevention and gun control two connected issues. Many suicides involving a firearm occur in states with fractured or minimal gun regulations. For example, in Utah, 85 percent of suicides involve a gun. Utah does not require background checks at gun shows, registration of lost or stolen guns, and reporting of mentally ill individuals to the background check database.

The American Foundation for Suicide Prevention is working with the National Shooting Sports Foundation to better educate the gun-owning community on how to reduce suicide. The partnership focuses on giving people the tools to identify the risk factors and warning signs of suicide, and teach them preventative measures and interventions available to them. 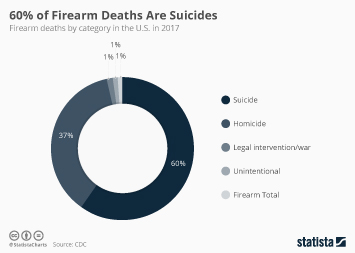 This chart shows the firearm deaths by category in the United States in 2017.