Skip to main content
53k
74.6k
87k
88.9k
This Saturday marks the second anniversary of the watershed New York Times article that detailed Harvey Weinstein’s years-long methodical and widespread sexually exploitive schemes. This was the first of what was to become many examples of high-profile men from all industries engaging in similarly inappropriate sexual behavior.

Among the general public, this dredged up wider discussions about sexual harassment and rape. The movement that emerged often takes on the moniker #MeToo after the Twitter hashtag that began trending when people began stepping forward to retell their experience with sexual harassment. In the days and weeks after the movement first took storm, public opinion rose in support of survivors. Now, moving away from the immediate fallout, where does the public stand?

According to a Gallup poll conducted in late February and March of this year, women by and large still believe that people are not sensitive enough to sexual harassment in the workplace, with 61 percent of women reporting that. Just under half of the men in the survey held that same position. Only two percent of women and four percent of men believe that people are currently hitting the right level of sensitivity regarding workplace sexual harassment.

Gallup polled in October 2017, just weeks after the first stories began to surface, and found that 54 percent of men thought that people in the workplace were not sensitive enough to sexual harassment, meaning public opinion for men moved ten percentage points in two years.

Over the past two decades, public opinion has moved immensely on this issue. When Gallup first asked this question back in March 1998, only 37 percent of people thought that people were not sensitive enough, a far cry from where both women and men stand on this issue now. 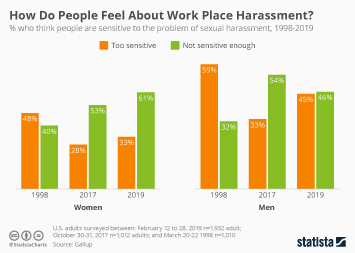 This chart shows the percent who think people are sensitive to the problem of sexual harassment, 1998-2019.