One thing to celebrate on Sunday’s Flag Day is that the U.S. is winning fair and square when it comes to which nation has the most stars on its flag. The U.S.’s 50 is far ahead of the competition. Second-placed Brazil only sports around half as many stars on its flag, albeit in a totally different style, showing a natural star constellation in the Southern hemisphere.

Other notable mentions of national flags featuring stars are Uzbekistan (12 stars, a symbolic number in Islam which alludes to the 12 zodiac signs) and Bosnia and Herzegovina, which features nine stars on its flag, which are actually seven full and two half stars. They are meant to create the illusion of infinite stars. The stars represent Europe, which can be read as a version of EU flag’s infinite circle of stars or even the union’s openness to accept new members, something Bosnia and Herzegovina is striving for.

The star is the most popular celestial symbol to be used on flags. Around 70 states in the world feature at least one on their flag, while around 20 feature suns and 15 feature the moon. Using a single star on a national flag is the most popular approach, which can represent many different things, ranging from Communism (North Korea, Vietnam, Angola), the light of Islam (Pakistan, Turkey), unity (Somalia, Myanmar, Jordan) or a guiding star (Chile, Croatia). 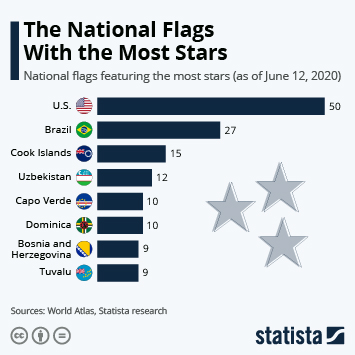 This chart shows the national flags with most stars in the world (as of June 12, 2020).