One year into the pandemic, Royal Caribbean Cruises became the first cruise line to announce fully vaccinated sailings. Earlier this month, the world's second largest cruise operator announced that its new flagship vessel Odyssey of the Seas, which is currently receiving finishing touches in Germany, would make its debut in May, with both crew and guests fully vaccinated against COVID-19.

Taking advantage of Israel's leading position in the global vaccination race, the 348-meter-long cruise liner is set to embark from Haifa, with Israeli residents first in line to board the ocean giant. "Sailing from Israel is an opportunity we have had our sights on for quite some time. We greatly appreciate the government of Israel for their collaboration and confidence in us to deliver memorable cruise experiences to their residents, and look forward to delivering on that promise aboard our newest ship – the first ‘Green Island’ at sea," said Michael Bayley, president and CEO of Royal Caribbean International.

Few industries have been hit harder by the coronavirus pandemic than the cruise industry. Due to the massive outbreak on board of the Diamond Princess, the industry was negatively associated with the pandemic from the start, and the large number of vessels reporting positive cases on board has led industry critics to call cruise ships “floating petri dishes”, which is perhaps a bit harsh.

As the following chart shows, cruise line revenues have practically disappeared since the pandemic hit in March, with each of the three largest operators seeing revenue drop by more than 70 percent in 2020. Carnival's seemingly less significant drop compared to its two largest competitors is simply owed to the fact that its fiscal year starts in December, giving the company one more month of normal operation before the pandemic hit. 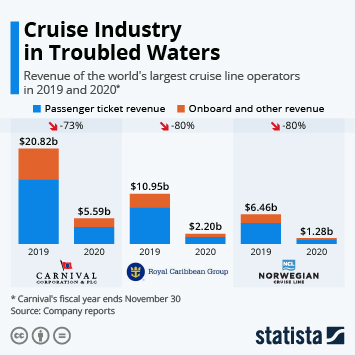 This chart shows revenue of the largest cruise lines in 2019 and 2020.