Making it to the U.S. Congress is often associated with an Ivy League education but it doesn’t have to be that way. While Harvard is the most common undergrad alma mater of currently elected members of the 117th Congress, those alums hardly represent the majority of Congresspeople. In fact, only 51 out of 530 politicians currently serving or elected to Congress went to one of the eight Ivy League schools for their first degree. They represent 14 percent of Senators and only 8.6 percent of Representatives, according to information collected by SoFlo Tutors and available on House.gov. These numbers rise to 17 percent and 12 percent, respectively, when considering all degrees.

75 percent of Senators and two thirds of Representatives hold a secondary degree or medical degree. The most popular is the law school degree Juris Doctor, which 179 Congresspeople currently hold, followed by the MBA (44) and the MPA or MPP (33). On top of the 17 medical doctors, there are also four dentists, three nurses, one veterinarian and one pharmacist in Congress.

Only 17 members of Congress do not hold at least a four-year degree, seven of which were newly elected in 2020. Four freshmen Representatives, Lauren Boebert (R-CO), Jerry Carl (R-AL), Madison Cawthorn (R-NC) and Matthew Rosendale (R-MT) have no academic credentials, which was previously very rare among Congresspeople. All returning members without a BA or equivalent completed at least some college, an associates degree or a training course at a specialized school. 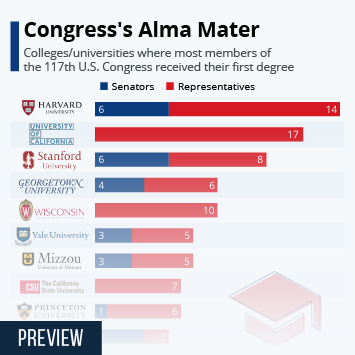 This chart shows the colleges/universities where most members of the 117th Congress received their first degree.