Indian industrial magnate Mukesh Ambani is well on his way to join the extremely exclusive club of those with a net worth of $100 billion or more to their name. Ambani would be the 11th current member, first Indian and second non-American in the club in its present form. The Bloomberg Billionaires Index showed Ambani at a net worth of $101 billion on October 11, and while he had descended back to $99.7 billion on October 12, the overall upwards trend of his wealth suggests that he will become a stable member of the world’s obscenely wealthy.

In comparison, the global 1 percent are a group of around 80 million people, while the global 0.1 percent still comprises 8 million individuals – making the $100 billion club the equivalent of the global 0.0000001 percent.

Tech billionaires dominate the global $100 billion club – and they are exclusively at home in the United States. Even though Tesla CEO Elon Musk – currently the richest person in the world – is arguably a hybrid case, the only tycoon other than Ambani who made it this big in consumer or industrial products is Frenchman Bernard Arnault. The third non-techie, Warren Buffett of investment group Berkshire Hathaway, also hails from the United States.

While the next additions to the more than exclusive club are still some time away, they will be more diverse. Francoise Bettencourt Meyers, heiress to one third of the L’Oreal cosmetics fortune, would be the first woman to join. Yet, her fortune of currently $82 billion is growing more slowly, so she could be overtaken on the way there by Spaniard Amancio Ortega, majority owner of clothing retail group Inditex, or even more likely, another Indian – Gautam Adani, founder of the Adani group port operation business.

The index is mainly influenced by the stock market valuations of the billionaires’ companies, where the large majority of their wealth is tied up. Another major index gauging global net worth, the Forbes World’s Billionaires List, is more conservative in its wealth estimates and only admits four people - Musk, Amazon CEO Jeff Bezos, Arnault and Microsoft founder Bill Gates - to the $100 billion club. 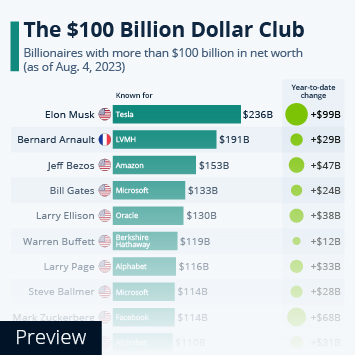