On February 24, 3 AM Greenwich Mean Time Russian president Vladimir Putin announced the start of a "military operation" in Ukraine, attacking several cities in the Eastern European country after months of amassing troops at its borders. This unexpected aggression may not only spell the beginning of a humanitarian crisis but is heavily influencing investor decisions as well. According to CNBC reports, futures in the Dow Jones, S&P 500 and Nasdaq have lost between two and 2.7 percent from the previous day hours before today's U.S. stock market opening. The broader indices themselves have hit year-to-date lows as well as our chart indicates.

After a crash at the onset of the pandemic in March 2020, the stock market rebounded with a successful 12-month stretch due in part to many tech companies profiting from the pandemic, a successful and faster than expected vaccine rollout and unprecedented fiscal stimulus. This trend continued throughout 2021, with temporary dips in September and October across all three indices. So far, 2022 hasn't been able to keep up with the upwards trend of last year though. Even before tensions between the Ukraine and Russia escalated, the Dow Jones, S&P 500 and Nasdaq saw major declines across the board, as the Omicron surge, inflation fears and the Ukraine situation all weighed on investors, with the tech-heavy Nasdaq losing almost 15 percent from December 31, 2021 at the end of January. By February 23, the day before Russia's military started its operations on Ukrainian territory, the Nasdaq had declined 16.7 percent this year, while the S&P 500 and Dow Jones Industrial Average had lost 11.3 percent and 8.8 percent compared to the end of 2021, respectively.

Unless peace is brokered between the two countries, this race towards the bottom is likely to continue. With Russia and Ukraine being some of the largest exporters of commodities like oil, gas, wheat, copper and nickel, the ongoing conflict will most likely result in price hikes as well as a further exacerbation of supply chain disruptions. 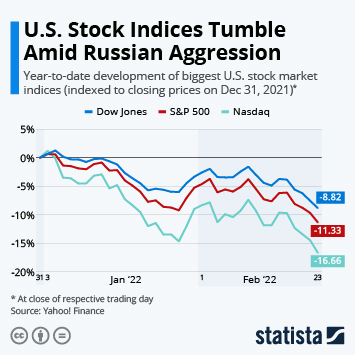