88.9k
Yesterday morning, Apple’s CEO Tim Cook took the stage to announce a couple of additions to his company’s product line-up. Perhaps the most notable device presented during the event was the iPhone SE. While underwhelming at first glance, the iPhone SE looks almost identical to the almost three-year old iPhone 5s, it may turn out to be just the right product at the right time.

First of all there’s the price: The iPhone SE starts at $399 for the 16 GB version, making it Apple’s most affordable iPhone to date. Even the iPhone 5c, which came equipped with inferior hardware from the start, was priced at $549 for the 16 GB version. At this price point, the iPhone SE could prove particularly popular in emerging markets such as India, which Tim Cook named as one of the company’s key growth markets.

Perhaps even more importantly though, the new iPhone fills a gap in Apple’s smartphone line-up that was becoming larger and larger the older the iPhone 5s grew: Despite the undisputed popularity of large-screen smartphones, there are still many people who prefer smartphones that fit inside a pocket and can be easily operated with one hand. As data by mobile analytics firm Mixpanel shows, almost a third of iPhone users still use one of the smaller models. Until yesterday, these people had no option but to cling to their aging iPhones or buy a new one equipped with 2013 hardware (at a very 2016 price). The iPhone SE, which is basically an iPhone 6s in a smaller package, gives these people what they want at a very attractive price. 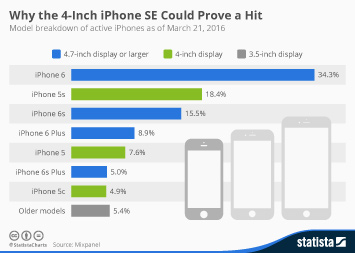 This chart provides a breakdown of active iPhone in March 2016 by model.