Wayfair is one of the largest online-only home goods retailers in the world, with more than 16,000 employees and over 30 million active customers. Based in Boston, Massachusetts, the company was founded in 2002 by entrepreneurs Niraj Shah and Steve Conine under the name of CSN stores. Later in 2011, it was rebranded with its current name, Wayfair. Upon initial success in its domestic market, the company started to expand to international markets in 2007. Despite that, the United States remains the largest market for the company, as more than 80 percent of Wayfair’s net revenues are generated in the country.
Wayfair’s net revenue worldwide jumped from just over 600 million U.S. dollars in 2012 to more than 14 billion U.S. dollars in 2020. That same year, the company delivered approximately 61 million orders, registering over 60 percent growth compared to 2020. Direct retail is by far the most profitable segment for the home goods e-retailer.

A market leader in a leading market

Although Amazon is the undisputed leader of North American e-commerce – with almost nine out of ten U.S. shoppers buying something on Amazon – Wayfair is one of the most mentioned e-retailers besides the e-commerce giant. That is the case, for instance, when shopping elsewhere than Amazon on Prime Day as well as among other e-commerce brands in the Canadian market.

A big spender in advertising

Wayfair has been increasing its investments in advertising over the years, surpassing 1.4 billion U.S. dollars of ad spend worldwide in 2020. Only in the United States, the company devoted nearly 1.2 billion to advertising campaigns that same year. This staggering figure made it one of the U.S. retailers with the largest ad spending, surpassing competitors in the home improvement sector such as Home Depot and Lowe's.
This text provides general information. Statista assumes no liability for the information given being complete or correct. Due to varying update cycles, statistics can display more up-to-date data than referenced in the text. 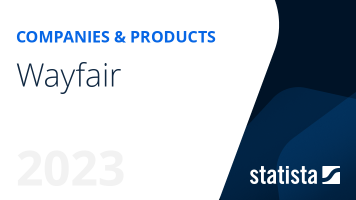 The most important key figures provide you with a compact summary of the topic of "Wayfair" and take you straight to the corresponding statistics.