Published by
P. Smith,
Jan 12, 2022
Department stores are large retail establishments that offer a wide range of products displayed in different departments such as apparel, accessories, appliances, cosmetics, home goods, and electronics to name a few. In Canada, they are popular shopping locations, and many Canadians prefer to purchase their goods from department stores compared to other retail channels. In 2019, there were over 500 department stores across the country being Winners, Nordstrom, and Hudson Bay among the most known department store brands.

In the last eight years, retail sales of general merchandise stores in Canada, have increased by about 30 percent. However, in its neighboring economy, the United States, the department stores industry has performed poorly in recent years. In 2019, Winners, a Canadian discount department store brand was the leading apparel retailer of the territory. In that year, its parent company, TJK Companies, generated net sales of over four billion dollars in Canada. Winner was one of the first off-price department stores in the North American country, and as of 2019, it had over 250 stores across the territory. Moreover, the Hudson’s Bay Company or HBC, the oldest company of North America, experienced a significant decrease in revenues. Like many other department stores such as Macy’s, Hudson’s Bay sales in the past couple of years plummeted, after figures peaked at 14.46 billion Canadian dollars back in 2016. The company, as many of its counterparts, suffered from the rapid consumer shift towards online shopping. In early 2020, Hudson’s Bay decided to go private and proceed to exit the Toronto Stock Exchange in March of that year.

In the following 5 chapters, you will quickly find the 24 most important statistics relating to "Department stores in Canada". 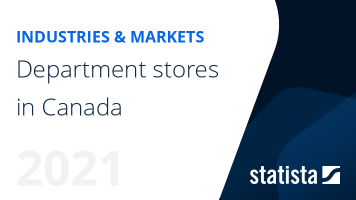 The most important key figures provide you with a compact summary of the topic of "Department stores in Canada" and take you straight to the corresponding statistics.

Department Stores in the U.S.