Called ‘fútbol’ in Spanish and ’futebol’ in Portuguese, the sport arrived in Latin America in the late 1800s and has since become deeply ingrained in its identity and culture. Nowadays, Brazil, Argentina, Uruguay, and Colombia stand out as the most valuable teams in the region. Meanwhile, other Latin American countries, such as Mexico and Venezuela, have also gained notoriety due to the number of players working abroad, and the large transfer revenue often at stake with the “exportation” of their most talented footballers.

Brazil, known as ‘O país do futebol’ or the country of football, tops the ranking of male national soccer teams in Latin America. Brazil is the only country in the world that has won the FIFA World Cup (881466) five times: in 1958, 1962, 1970, 1994, and 2002. Moreover, and despite recent corruption scandals, its main soccer association, the Brazilian Football Confederation (CBF, as abbreviated in Portuguese) keeps growing. Before the COVID-19 impact, CBF’s net income surged by more than 250 percent to 190 million Brazilian reals— or approximately 47 million US dollars.

How do other countries compare?

Having won the World Cup twice each, Uruguay and Argentina are also major soccer markets in the region. As of 2020-end, these two countries were among the top 10 teams in the FIFA World Ranking of men's national soccer teams. Founded by workers of a railway company over 120 years ago, Peñarol is today the Uruguayan club with the highest market value. While in Argentina, River Plate tops the market value ranking, closely followed by its nemesis, the Boca Juniors.

Mexico has never won the World Cup, and the last time the country made it to the quarterfinals was in 1986. Regardless, Mexico has made it into the best ten national teams worldwide several times since then. Besides, two Mexican clubs were among the five most valuable Latin American soccer clubs in 2020: CD Guadalajara and CF Monterrey, which place right below Brazilian Corinthians and Palmeiras.

When it comes to women in football, Latin America still has a long way to go. By mid-2021, Brazil was the only team from the region included in the FIFA top 10 —right below France and Canada—, while Colombia and Mexico ranked 26th and 28th, respectively. Meanwhile, Argentina, Costa Rica, Chile, and Paraguay were also included in the top 50 ranking in that year.
This text provides general information. Statista assumes no liability for the information given being complete or correct. Due to varying update cycles, statistics can display more up-to-date data than referenced in the text.

Most valuable football clubs in the Liga MX 2022 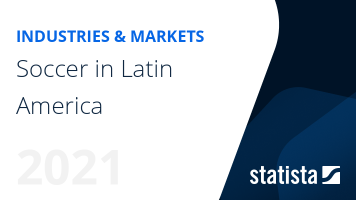 The most important key figures provide you with a compact summary of the topic of "Soccer in Latin America" and take you straight to the corresponding statistics.