Published by Statista Research Department, Nov 28, 2022
Russia is one of the largest footwear markets globally. In 2021, the market size of footwear in the country reached nearly 11 billion U.S. dollars, which was the eighth largest figure worldwide. In terms of pairs sold, the volume of the footwear market experienced an increase in 2021 after a drop in the previous year. As a result of the exodus of major Western retailers in response to the war in Ukraine in 2022, the average number of shoe pairs sold per capita is forecast to drop in that year. It is expected that people in Russia will buy up to two pairs of textile shoes per capita in 2027, down one pair compared to 2021.

Shoe retail and trade in Russia

Despite a clear preference for a traditional purchasing experience, footwear shoppers in Russia have been gradually adapting to online shopping. In 2021, Russian women spent nearly 3.9 thousand Russian rubles on footwear online, while male consumers had a slightly lower expenditure. When looking at international trade dynamics of shoes in Russia, imports have always prevailed exports by value. A significant growth in footwear imports to Russia from 2016 was related to the ruble depreciation, which made national shoe production less profitable and imports of cheap footwear more cost-effective.

From the customers’ perspective, every second buyer in Russia considered shopping malls more convenient for footwear shopping compared to other store types in 2021. The average spending on shoe purchases was measured at its highest among middle-aged Russians. The major online retailer of the product in question was Lamoda, while Ostin, H&M, and Kari led the ranking of major omnichannel retailers of footwear and apparel in 2021.

In the following 6 chapters, you will quickly find the 34 most important statistics relating to "Footwear in Russia ". 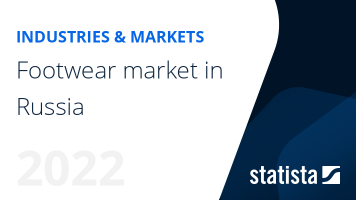 The most important key figures provide you with a compact summary of the topic of "Footwear in Russia " and take you straight to the corresponding statistics.