Published by
Raynor de Best,
Nov 12, 2020
Currency systems are in place to facilitate the exchange of goods and services. Money is the most widely recognized form of currency, and countries around the world issue their own legal tender to be used within their own borders. However, some countries allow a foreign currency to replace or operate alongside the domestic currency. Electronic transactions can now take place without the exchange of physical currency – coins and banknotes – and the emergence of cryptocurrencies could further revolutionize the future of payments.

Exchange rates allow individuals and companies to see how much a domestic currency is worth in a foreign currency. In 2019, the euro to U.S. dollar average exchange rate was equal to 1.12. Some exchange rates are fixed, but most are flexible, meaning they fluctuate according to supply and demand on the foreign exchange market. Interest rates, which are used to promote economic growth or limit inflation, can have a big influence on exchange rates. In general, higher interest rates incentivize saving and increase the demand from foreign investors, driving up the value of that particular currency.

Currency reserves can be used to manage supply and demand in markets, keeping the value of a country’s currency at a fixed rate. This can also be referred to as a pegged exchange rate because a country controls the performance of its currency in relation to the one it is pegged to. For example, if a country’s currency falls in comparison to another, foreign exchange reserves are used to buy the domestic currency, which decreases its supply on the market and increases its value. Alternatively, if the value of a domestic currency rises, a country can increase the supply by selling more of it on the foreign exchange market. China was the country with the largest foreign currency reserves in 2018.

Currencies are traded on the foreign exchange market, which is the largest financial market in the world. The market is made up of currencies from across the globe; the major currencies are the euro, U.S. dollar, Japanese yen, British pound, Australian dollar, Canadian dollar, and Swiss franc. Participants in the market include banks, commercial companies, and investment management firms. Currencies are traded in pairs, meaning that the price movement of one currency is always relative to another. The foreign exchange market is decentralized, with a global network of brokers and traders linked by technology.

Cryptocurrencies also operate within a decentralized system. They are digital currencies that use blockchain technology to track transactions through a network of computers. Cryptocurrencies can be used as an alternative currency to buy goods and services, but some people simply buy them as an investment. Bitcoin is the most expensive cryptocurrency worldwide, but other virtual currencies include Ethereum and Ripple. Cryptocurrencies remain largely independent from governments and the actions of monetary authorities, but there are calls for the market to be more regulated.

In the following 11 chapters, you will quickly find the 49 most important statistics relating to "Global currencies".

The most important key figures provide you with a compact summary of the topic of "Global currencies" and take you straight to the corresponding statistics.

Cashless payments in the United States 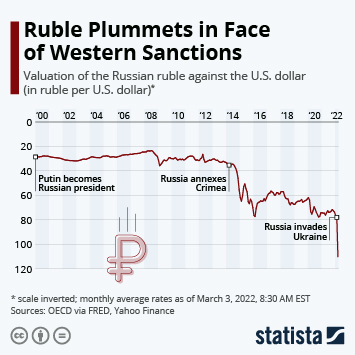 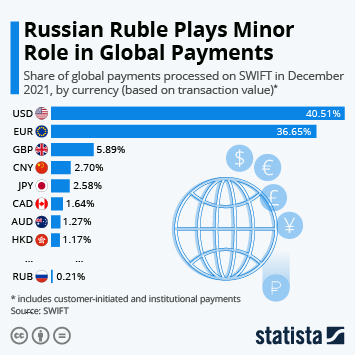