Economic impact of the coronavirus (COVID-19) in France - statistics & facts

On March 16, 2020, the French were confined to their homes for nearly two months, the first confinement in a long series that saw many businesses close their doors for several months and caused an economic earthquake across industries. More than two years after the outbreak of the COVID-19 pandemic in France, the outcome for the French economy and repercussions by sector are being assessed.

While its recovery was rather strong in 2021, the total wealth created on the French territory collapsed in 2020, and the GDP in France decreased by eight percent compared to the previous year. This historic economic crash is the largest since the end of the Second World War. Faced with such an economic crisis, an explosion in unemployment seemed inevitable. However, the unemployment rate actually fell in 2020. The French government quickly adopted short-time working and offered companies zero interest loans so that they could pay their suppliers and avoid major liquidation.
The French Ministry of Labor reports, however, that the number of hiring of young people under the age of 26 on fixed-term contracts of more than three months and on open-ended contracts had dropped by nearly 15 percent between 2019 and 2020. The number of job offers available to young graduates had also declined sharply.

Tourism at its lowest, e-commerce booming

Deprived of "non-essential" shops, the French have been shopping massively via online stores. This can be seen in particular via the online activity of the French, when internet traffic exploded during the confinements of March, April and November 2020. As a result, online sales have recorded high figures since April 2020.
The sky was greyer for the tourism industry. Because of the successive lockdowns in 2020, the hotel sector had plunged to a 14.6 percent occupancy rate in April 2020. The situation was equally alarming for ski resorts, where ski lifts had been shut down in March 15, 2020. The occupancy rate of mountain hotels did not exceed 50 percent for the 2020/2021 season. Tourist transport companies have also suffered a significant drop in turnover, with the flagship of French air transport, Air France-KLM, seeing its turnover divided by two in 2020, and still well below normal in 2021.

The images of Parisians fleeing the capital a few days before the confinement have been widely reported in the media. In a city where rents are expensive and space is a scarce commodity, the prospect of being confined to a small apartment has pushed many Parisians to move to greener areas or to settle in less populated cities. In 2020, Nantes and Rennes saw apartment prices increase by 5 to 7.4 percent. But overall, real estate transactions fell sharply in 2020, during which apartment sales dropped by more than 25 percent.
This text provides general information. Statista assumes no liability for the information given being complete or correct. Due to varying update cycles, statistics can display more up-to-date data than referenced in the text.
Published by Statista Research Department, Jun 7, 2022

Online sales revenue growth rate in France in May 2020
62% 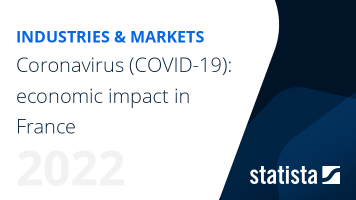 The most important key figures provide you with a compact summary of the topic of "Economic impact of the coronavirus (COVID-19) in France" and take you straight to the corresponding statistics.