Donald Trump, talking to CIA employees during his presidency, once noted that he thought he held the "all-time record in the history of Time magazine" for being pictured on the cover. In June and July of 2018, Trump did score three consecutive covers in a row, but that still didn't make him the most-featured president or person in the history of the publication.

Trump has been on the magazine's cover 35 times, fewer than Richard Nixon, who was pictured 40 times, as well as Ronald Reagan, who appeared 37 times. Trump was featured on the cover for the first time in 1989 and last in August 2020. After that, President Joe Biden took over the cover. He was featured three times between November and February alone, including when he won Person of the Year together with Vice President Kamala Harris. Despite being a former two-term vice president and a long-time senator, Biden has only eight covers to his name, including three as president or president-elect, four as a presidential candidate and only one as vice president.

Naturally, presidents who are in office for two terms have more time to rack up covers, but, as the example of Nixon shows, those whose presidencies were fraught with controversy also score high. Trump, who might still be impeached after leaving office, could therefore earn more than the share of covers expected for a former president.

Because it is almost impossible to draw the line at which cover is dedicated to a president and which just includes one, all covers featuring presidents before, during and after their presidencies are included in the count, as are representations and depictions clearly showing certain presidents as available in the Time Cover Store. Very minor depictions of presidents in the background of covers are excluded. 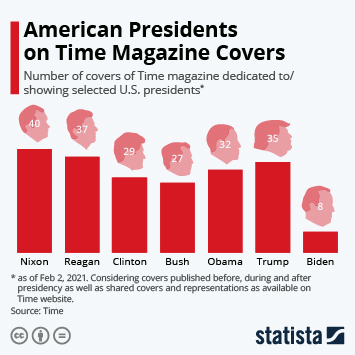 This chart shows the number of issues of Time magazine with selected presidents on their covers.