The National Oceanic and Atmospheric Administration predicts an active Atlantic hurricane season for 2021 and expects six to ten hurricanes to occur during the year, with three to five of those likely to become major hurricanes of Category 3 or above on the Saffir-Simpson scale. So far, four hurricanes have formed over the Atlantic basin in 2021. The latest - and strongest - of the ongoing season was Hurricane Ida, which made landfall in Louisiana Sunday night, causing evacuations, flooding and power cuts. The latter were especially devastating as many COVID-19 patients on ventilators are currently filling hospitals in the state. Ida was classified as a category 4 hurricane, the second major hurricane of the season after Hurricane Grace, which hit the Mexican state of Veracruz as a category 3 storm.

The 2020 season was already an extremely busy one for hurricanes, as our chart shows. A total of 14 hurricanes formed over the Atlantic basin - the most since 2005, the year of Hurricane Katrina. Six of those were major hurricanes, including Hurricane Laura, which made landfall in Louisiana in August, and Hurricanes Eta and Iota, which caused devastation in Central America in November.

Once more, NOAA ran out of alphabetically ordered storm names and had to resort to the Greek alphabet as early as September 18. NOAA names all tropical storms over the Atlantic even though only some turn into hurricanes. In 2020, there where a whopping 30 named storms, a new record which created nine greek alphabet names and led the discontinuation of the Greek alphabet auxiliary list. Because the names of storms that cause major damage are typically retired, repeated use of Greek letters charted a quick path for them to become obsolete - like already happened in the case of Eta and Iota.

2019, on the other hand, was a rather subdued hurricane season, but shows another interesting trend. Half of the six hurricanes that occurred that year were major hurricanes - a trend that started in the late 1990s. The number of hurricanes in categories 3-5 on the Saffir-Simpson scale has increased from on average of around 1.6 per year in the 1970s and 1980s to an average of 3.1-3.8 per year in the 2000s and 2010s. Climate change has been identified as a reason why stronger hurricanes occur.

More evidence that hurricane seasons are changing can be deferred from the timing of named storms. 2020's first storm - Arthur - was named on May 15 after forming near the Bahamas. This made 2020 the sixth consecutive year that a named storm formed before the start of the official season on June 1.

2005, when Hurricane Katrina struck New Orleans, was the worst hurricane seasons since 1851, records from the National Oceanographic & Meteorological Laboratory at NOAA show. Hurricane Katrina was just one of seven major hurricanes observed in the Atlantic basin that year, making almost half of all tropical cyclones in 2005 major hurricanes. 2005 was the year with most hurricanes in the Atlantic (15), followed by 2020 (14), 2010 (12, including Hurricane Sandy) and 1969 (also 12). 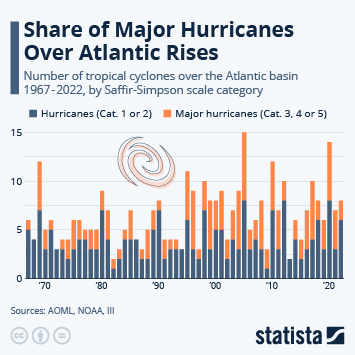 This chart shows the number of hurricanes over the Atlantic basin by category (1967-2020).